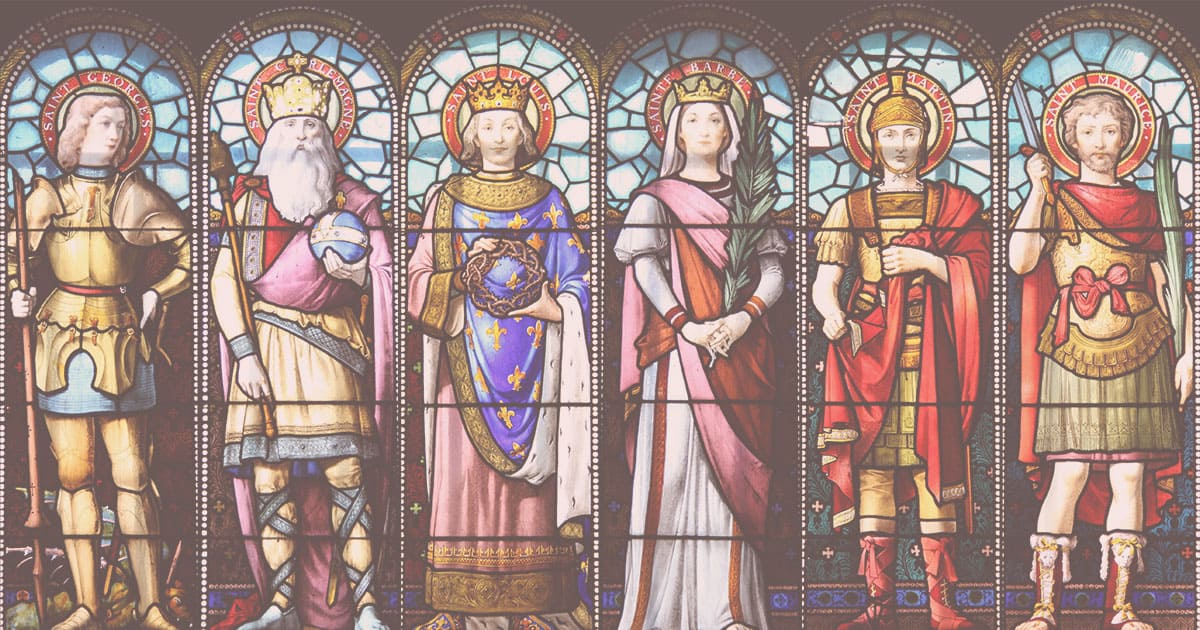 The 10k Saints of the Catholic Church

Did you know that there are approximately 10,000 saints in the Catholic Church? And did you know that we are all called to be saints? Never in my wildest dreams would I consider myself a candidate for sainthood. Never. And to be honest, I am not even sure what you need to do to be a saint, so I looked it up and found the easiest way to explain it.

Evidence must be presented to persuade Church officials that the person in question in fact lived a virtuous life, had faith, and had the support and help of God. The Church also looks at miracles as evidence that God is working through that person. For beatification (to become a “Blessed”), you need to have one miracle attributed to your intercession; canonization requires a second miracle. Can you believe it? It takes TWO verified miracles to be canonized as a saint, and there are 10,000 of them. Astounding! This process sometimes takes five to ten years to complete—as, we can assume, proving one miracle, let alone two, is not an overnight task.

Of course, there is more to it, but that is the gist. I remember hearing saint Mother Teresa say that you need to smile; it is in all the little things you do every day and not some big monumental act.

But what about miracles? Don’t they qualify as “monumental acts”?

No way that could be me.

Let’s think about it for a second. Every single saint was a human being. You are not born a saint. Saints are made of everyday, living, and breathing people like you and me.

It comes down to how much faith they had and how virtuously they lived their lives. The more virtue one has, the more God gives them graces and works through them to do amazing supernatural acts—miracles.

I just want to highlight two saints for you that I hold in great reverence—starting with saint Augustine, whose mother, saint Monica, prayed for seventeen years for the conversion of her son. But saint Augustine took quite some time to find God and struggled with the changes that might come if and when he did find Him.

Saint Augustine was well educated and became a teacher of rhetoric in Carthage. There he had an affair with a woman for over 15 years. Saint Augustine never married her, but they had a son together.

He was very good at his work, and as a result, he was invited to Milan to become a professor. He encountered many different religious ideas during his travels and was discerning which one to follow.

He was considering devoting his life to God, but thought it was impossible—that no man could ever live up to the Christian ideal. Instead he spent his time seeking pleasure and continued to live a very sinful life.

At one point in time, he invited God to save him, but just not quite yet.

I struggle with that all the time! Living life with worldly pleasures is so easy—who wouldn’t ask for a little more time “living it up in sin” versus changing to a more virtuous life? Virtue doesn’t come naturally to fallen human beings; vice certainly does.

Over the years, despite his sinful ways, he continued to correspond with his mother, saint Monica and Bishop Ambrose of Milan, who also became a saint. He read many of the writings of saint Ambrose, which caused him to consider becoming a Christian. He eventually saw the signs pointing him to the life of Christ and began to change his ways.

He used his talents in rhetoric for Christian thought and writing. He was one of the best-known writers of his time and his prayer life was extraordinary. He is one of four Doctors of the church, just goes to show that any sinner can turn their life around and be a saint!

Saint Augustine is the patron saint of brewers, strong vices, or habits you would like to break.

I believe saint Augustine had similar challenges to what we face in today’s secular culture. I share Augustine’s disbelief that anyone can truly live up to the Christian way of life. But in the end, we are all human. To change and try to be better every day is the true message here, and that eventually brought him to sainthood. I have strong vices and habits I would like to break, so I am going to begin to pray for his intercession in my life! There are about 10,000 different saints we can ask to intercede for us with our challenges in life. Let’s take advantage of that, I can use all the prayers I can get. Do you have a cross on your shoulder or need some help? Google your issue to see who the patron saint is to help you.

Now let’s look at saint Padre Pio—an amazing, medically and scientifically proven saint with the stigmata of Jesus’ wounds from his Passion and Crucifixion! I saw this documentary on saint Padre Pio on EWTN, and I was enthralled! I urge you to look him up as he is a modern saint, not someone from the Middle Ages. He passed from this world in 1968. If you can, watch the documentaries and look up every piece of research you can on this marvel.

As a child, Francisco (his first name) was very religious. At the age of five he decided to dedicate his life to God. WOW! His parents were also very religious and supported his Catholic development. He was known to take on the penances of others, and his mother once scolded him for sleeping on a stone floor.

At this age, he could see his guardian angel, and he spoke to Jesus and the Virgin Mary quite often. This was not something he was taught to do; it came so naturally to him he thought others could see them as well.

Francisco took care of a small flock of sheep for his family, which prevented him from keeping up with the other kids in school. He was also a very sick child. After only 3 years of school he asked his parents if he could join the Franciscan Friars. His parents took him to them to see if he could join, but they said he needed more schooling. His father went to America to work in order to pay for a private teacher. At 15, Francisco entered the monastery. Saint Padre Pio became a priest in 1910 but was permitted to stay home due to his health.

On September 20, 1910, he was listening to confessions when he felt pain in his hands and feet. He noticed the stigmata, the wounds of Christ appearing. The wounds smelled like roses and although they continued to bleed, they never became infected. Doctors who examined the stigmata were amazed at their perfectly round shape.

By 1919, word spread about saint Padre Pio’s stigmata and people from all over the world came to examine him. Saint Padre Pio was very uncomfortable with this newfound popularity and attention. A church investigation into his stigmata concluded that his condition was not fake.

In 1947 a humble Polish priest visited saint Padre Pio, who prophetically told him that he would rise to the highest post of the Church. That humble priest became Pope John Paul II in 1978! How cool is that? Saint Padre Pio predicted he would become the Pope!

Saint Padre Pio was internationally famous for his piety, his charity, and the quality of his teachings. He never prayed for himself—always for others. His mantra to everyone: Pray, Hope, and Don’t Worry.

In the documentary I saw, many priests attended to him as he was sickly with arthritis that never left. The wounds on his hands and feet were visible, but he also had wounds where Christ was stabbed by the sword on his side and the wound on his right shoulder where Christ carried his cross. He also had cancer, which was miraculously cured after just two treatments.

He was in constant pain and barely slept. But when he did sleep, he gripped the rosary in his hands. One person who tended to him said he tried his hardest to get the rosary out of his hands, but it was impossible.

The Mass was an incredible experience. Many assistants had to help saint Padre Pio stand while he went through the Consecration of the Eucharist. Every single Mass, saint Padre Pio felt the pain and wounds of Jesus’ Passion. He would sweat, sometimes fall down, and at times his wounds would bleed on the altar. He said the most painful of the wounds was his shoulder where Jesus carried the cross. I find this fascinating. It is what we are ALL asked to do—carry our cross—and the wound caused by it was more painful to saint Padre Pio than the wounds inflicted by the Crucifixion itself.

He was also known as a mystic, and he dedicated much of his priesthood to hearing confessions, sometimes sixteen plus hours a day. He knew when you were not telling all of your sins and would call you out on them. It was said he could read your soul.

Some said he was a modern Jesus. I believe he was a unique instrument of God here on earth, and at such a young age, he followed God completely and with joy in his own suffering. It is incomprehensible to me.

Did I mention that he was reported, multiple times, to bi-locate? That means to be in two locations at once. Plus, he was also known to heal people.

One day on Relevant Radio, they were interviewing a man who attended one of saint Padre Pio’s Mass, and he brought his own rosary with him. During the Mass, he said his rosary smelled like roses. He thought it was coming from the flowers in the church, but the scent of the roses lasted for months on his rosary. WOW!

Saint Padre Pio passed away in 1968, and his funeral was attended by over 100,000 people. He is known as the patron saint of Civil Defense volunteers and adolescents.

I could go on and on with the saints—somebody stop me!

We are all called to be saints. We are all called to love one another and increase our faith, hope and love. God only grants graces to those who ask for His love and mercy. All we must do is ask. He needs an invitation, then He will do the rest. He will meet you where you are and take you on your very own journey—one that only He can sherpa you on, because only He knows the way and how to use your unique talents for the world.

Go ahead—with a dose of humility, ask Him for His help and surrender to His will. What have you got to lose? Who knows, maybe someday YOU will be a saint!

What Are You Waiting For?

You'll also receive inspirational notes, other free resources, and offers, but you can unsubscribe anytime. Your info is safe, ​visit my Privacy Policy.

Your Miracle is Waiting...

You'll also receive inspirational notes, other free resources, and offers, but you can unsubscribe at any time. Your info is safe, check out my Privacy Policy.